“YES” Is In Your Future! 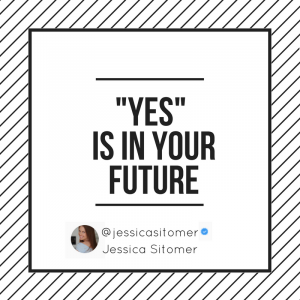 For years I’ve been listening to a question asked that goes a little something like this:

“If you knew there were 20 gold bars buried in your backyard, how long would you dig to find them?”

This prompted me to do a Google search. Turns out, as of today, gold bars are worth $506,400. Multiply that by 20 and we’re talking over ten million dollars. I’m guessing you wouldn’t give up until you found most, if not all of them, right?

We love a sure thing, don’t we? I once did an exercise with a coaching group I ran, where I told them that one of the successful mentors in our program was going to give $100K to the person who accomplished the most in the next year. I had the group write out their goals and action plans and share them with each other. For a group that had been pretty slow going, they came alive! Why? They had a guarantee… at least they thought they did. I then explained that it was just an exercise. Then I pointed out something interesting. If they all implemented the plans they’d put in place, there was a pretty good chance they could generate that $100K or at least the union jobs that would get them on their way.

This exercise prompted me to take my exercise further. I created/produced a reality show called Light, Camera, Action! where 16 entertainment professionals were competing to win $500 (far less than the 100K I might add). In four days (and 8 episodes later), my contestants who made it to the top ten, took more action than most entertainment professionals take in a year or more!

I share this with you because there are YESes in your future. Whatever your dream, your goals, the business you’re building, if you see it, you have to work for it, right? It’s too rare that a goal achievement falls into your lap, 99.999999999999% of the time you have to take action. Yet, the majority of people pursuing a goal or a passion give up. Why? Too many NOs.

I can’t promise you gold bricks, but I can promise you there are yeses in your future, but like the bricks, how long will you dig to find them?

Like my coaching group, I could give you a fake guarantee and promise you after 57 nos, you’ll get the yes that will change your life. But instead of me making false promises, what if you acted “as-if” after the 57th no, you would get your yes? Or better yet, what if you just believe?

I know there are thousands of yeses in my future, that’s why I keep going when I get nos. Some of them throw me off for an hour, or a day, or longer… I’m human. But I will NEVER let someone else’s NO deter me from pursuing my passions! Will you?

Have you ever looked back at what was once a disappointment only to realize that something far better came as a result of it? This always reminds me of Lisa Kudrow, and how she got fired as Roz on Frazier once the pilot was picked up to go to series. She was replaced by another actress. Can you imagine how disappointing that must have been for her? But then she got Phoebe on Friends! That was a yes, in her future that she may have missed, had she quit after the Frazier disappointment.

What if your yeses are already planned out for you? What if the dream was put in your heart because you were meant to have it as long as you pursued it? If you truly believe that, if you have certainty that your dream is your destiny and all the people, ideas, and yeses are in your future… will you let rejection, nos, and obstacles stop you?

I challenge you to decide to believe with certainty, that your yeses are in your future waiting for you, and the nos along the way are put there for a reason; to teach you, divert you, or stall you, until your YES comes along.